Images of flayed human bodies, so-called écorché figures, occur with some frequency in artistic and anatomical handbooks from the sixteenth century onwards. Three-dimensional écorché models (‘anatomies’) sculpted in wood or wax are also occasionally listed in artist’s and collector’s inventories from this period. However, in the eighteenth century, écorchés cast in metal or plaster became a mass-produced staple in the artist’s workshop and the anatomy classroom, with one model becoming extremely popular. How did eighteenth-century artisans of the body, both visual artists and anatomists, collaborate in the creation of these écorché models?  How were they used, and by whom? Why did one model in particular, jointly created by a Scottish anatomist and a Danish artist, become so popular and was reproduced so often that it became the écorché model? 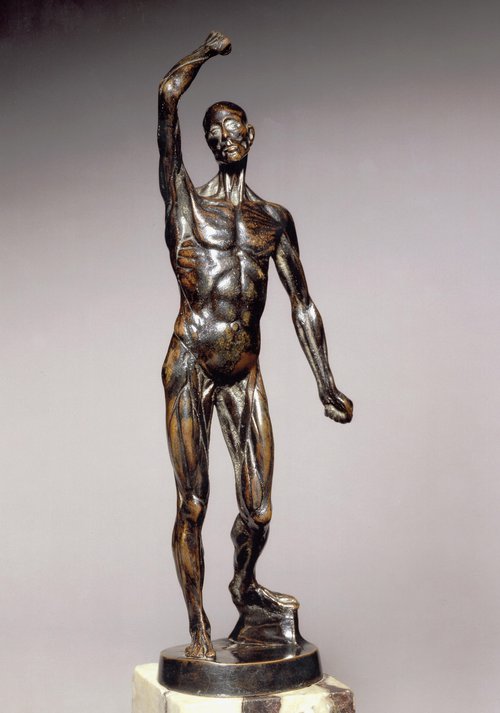 French physician Louis Thomas  Jérôme Auzoux (1797-1880) perfected a manufacturing process  for papier-maché anatomical models. Close links to the medical university of Paris ensured him of customers and accurate information on anatomical discoveries. His anatomical models became world famous because of the quality and details of the models. Surprisingly Auzoux did not only produce human écorchés. In various collections one can find animal écorché models as well. What could have been Auzoux’ reasons to complete his catalogue with this specific type of animal models?

The Technical Art History Colloquia are a cooperation of the ARTECHNE Project (Utrecht University and University of Amsterdam), the Netherlands Institute for Conservation, Art and Science (NICAS), the University of Amsterdam and the Mauritshuis. The ARTECHNE project has received funding from the European Research Council (ERC) under the European Union’s Horizon 2020 research and innovation programme (grant agreement No 648718). Monthly meetings take place on Thursdays. This edition of the Technical Art History Colloquium will be organised in Leiden at and focuses on anatomy.

The mission of Rijksmuseum Boerhaave, the Dutch National Museum for the History of Science and Medicine, is to increase public support for science in the Netherlands. The Museum’s activities are always designed to connect with current issues.